TripAdvisor ranking, do you know how it works?

In a recent visit to a hotel, meeting with his head of marketing and communication, he told us worried: "we have to do something, we have to climb positions in the TripAdvisor ranking; we are in position 63, we have consulted with them (TripAdvisor) and they tell us that the most important thing is that we have more opinions…"; this is how the "hamster wheel" race starts on TripAdvisor for the hotel.

First and foremost, we cannot but congratulate TripAdvisor for the success of its business model within the hotel distribution; innovative and bold in its initial idea, has become a metasearch of reference in the sector. In any case, in this post, we want to evaluate its value proposal form a hotel business perspective and provide analysis to make the best possible business decisions.

Analyzing this customer's comment (we will call Hotel V), which is debating in entering the revolving wheel of TripAdvisor to climb positions in the ranking, it should be noted that there is not just one ranking, but several. In the home page of TripAdvisor, once the selection of the destination is made, we find the search filters preceded by the following preface: "The lowest prices of", a slogan that defines what the user can expect,

and then the rankings that are proposed are:

Traveller ranked. Top rated hotels on TripAdvisor according to travelers' opinions; although not only the valuations intervene: it also includes (according to TripAdvisor) the amount of comments of the hotel and the recent. TripAdvisor has not published exactly how this ranking is calculated. According to them, this lack of transparency is justified because "it's like the Coca-Cola formula."

Best value (SHOWN BY DEFAULT). Classified accommodations "according to an algorithm defined by TripAdvisor": they declare that it is based on traveler ratings, confirmed availability, prices, popularity for reservations, location and personal preferences of each user. There is no information on how this order is prepared, but we imagine that it is proportional to the statistical expectation that the user reserves or clicks for that hotel.

Distance. First show the establishments located closest to the center with confirmed availability.

In the case of Hotel V, position 63 referred to the "traveller ranked" ranking (NOT the "Best value" ranking, which is the default); and we wanted to investigate a little more, analyzing the position data of our client with respect to its competitors (hotels of similar category, customer segment and location within the city), and it turned out like this: 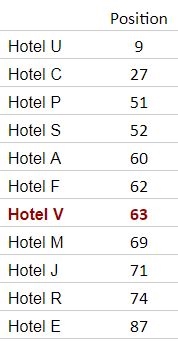 Then we tried to see the relationship between position and number of opinions, and the result was: 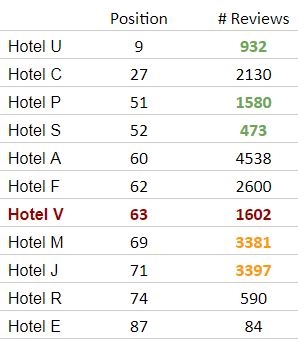 Thus, we see how hotels with fewer published opinions are in a better position than Hotel V, despite having a lower number of answers (green); and on the contrary, hotels that double in number of opinions to Hotel V, however, are below in the ranking (orange).

We note that the "Traveller ranked" ranking does not directly correlate with the number of opinions, and in any case, it will take into account customer ratings. We take the ratings of each hotel (number of opinions Excellent, Good, Fair, Bad, Very bad, and we assign a value, to get an average rating of each of the hotels in the study). The result was this: 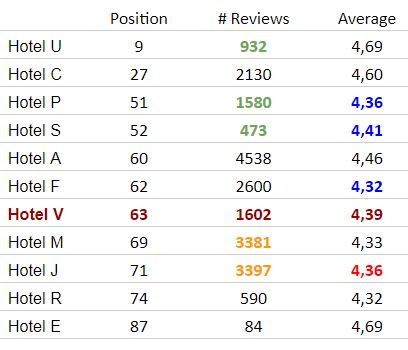 Here we show that the number of opinions does not determine the ranking, and that the score of the opinions are within the equation, but we do not finish identifying in what way. We found that hotels with worse average than Hotel V and with fewer opinions are in a better position in the ranking (Hotels P and Hotel F). And hotels with better average and fewer opinions (Hotel S) also have a better position (blue).

The strategy of how to use the client's opinion is a continuous conscience conflict between the benefit of prescription / reputation and operational value (for control and improvement). If you bet on one of the uses in excess, the other is harmed. Maintaining a reasonable balance would seem the most sensible option.

For all these reasons, we do not believe it is positive to recommend our clients to rush in the continuous race of obtaining "more opinions" on TripAdvisor at all costs, in order to achieve a better position in the ranking, because there does not seem to be a cause / effect relationship. And if we include in the equation the variable "valuation" we do not find a clear pattern either. This small analysis that we have done tells us that there must be other variables that can explain the cases in which having more opinions and better average of customer valuation can have a worse position with respect to other hotels (that have less opinions and / or worse evaluations).

To try to understand and approach the problem, there are several factors to consider:

TripAdvisor offers Hotel V an option: to let Tripadvisor to manage the opinion request submissions and thus obtain more opinions and better position (cause / effect relationship that is not confirmed in our analysis). The fact is that our Hotel V, on the verge of becoming "Hotel Hamster" is forced to enter the wheel and help rotate it through creating more and more of the precious content generated by the user, one of the pillars of Tripadvisor business. But what other effects would that decision have?, several:

Do you want to know more about our services?
Contact Us!
*/